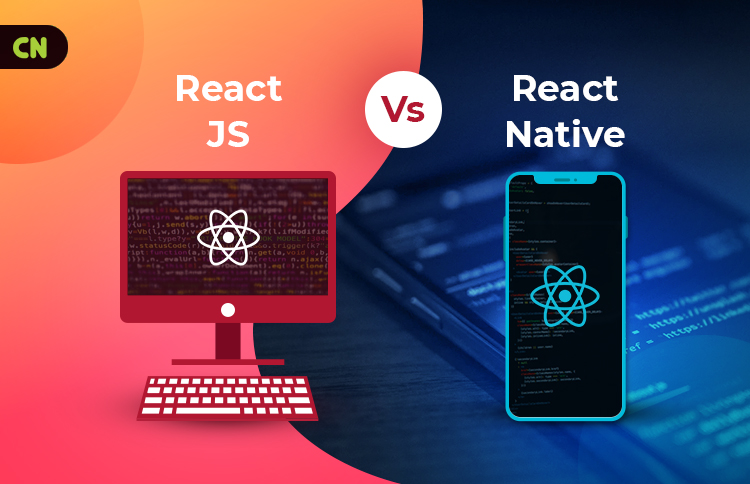 Sure, ReactJS and React Native share the same technology backbone, but, there are marked differences between the two.

ReactJS was launched by the Facebook team in 2011 for creating high-performing web apps.

Let’s delve into each to get a better grasp:

Developed by Facebook, React or ReactJS is an open-source JavaScript library that is created for developing gorgeous web interfaces.

Unlike other frameworks that use the traditional DOM, ReactJS uses virtual DOM. And how does it benefit? Well, the traditional DOM responds to each user query or change by updating the entire document or page, resulting in slower updates. However, React’s virtual DOM updates only parts of the page, instead of refreshing the entire web page. This results in quicker updates and decreases the page refresh time.

Built by Facebook, React Native is a JavaScript mobile framework. This open-source framework lets developers use platform-agnostic native components (such as Text, Image, and View) to create native iOS and Android apps.

React Native facilitates super-fast app development, thanks to JavaScript. React components interact with native APIs via JavaScript to create native applications. It makes it possible (and even easier) for the developers to create cross-platform apps from a single codebase. As a result, the hassle of developing a code structure from scratch could be avoided. The result? Quicker app development.

Besides, over 1200 contributors in the React community regularly come up with innovative ideas and valuable inputs in the world of tech, making it easier for the developers to create dynamic mobile apps.

Thousands of organizations, ranging from renowned Fortune 500 companies to hot new startups, use React Native today. Since the time of its launch, React Native was used by influential firms like Instagram, Skype, Facebook, Tesla, Bloomberg, Airbnb, Walmart and Uber Eats. Clearly, the curiosity to work with this framework is constantly growing.

Although the differences between ReactJS and React Native are a lot more than their similarities, however, some key elements are relevant to both. Let’s talk through the similarities first:

However, what people talk about the most are the differences between the two that make each one unique in its own way. Here’s a small comparison below:

Currently, mobile apps are predicted to generate a total of $188.9 billion in global revenue through app stores and in-app advertising in 2020. (Statista).

These numbers may be hard to swallow, but they clearly explain why developers are heavily relying on React Native to write brilliant applications.

Whether you use ReactJS or React Native, both can help you build apps with faster speed and complex features. All you need is a team of talented programmers who can turn your vision into reality.

If you’re looking to build a React app from the ground up, reach out to us.

We’d love to discuss your business goals and help you keep in sync with this growing technological space.