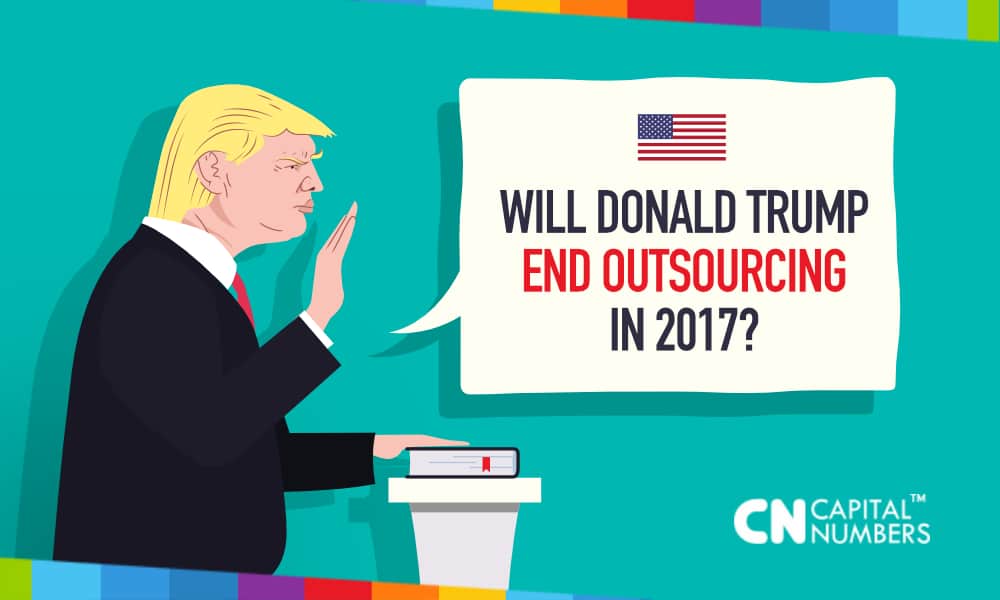 Will Donald Trump End Outsourcing In 2017?

With Donald Trump finally making it to Presidency, there has been a lot of turmoil and panic in countries such as India and China with the threat of ending outsourcing to these countries. At first glance, it seems quite impossible since all major American corporations have utilized this resource as a long-standing practice, outsourcing their manufacturing to  China (notably tech firms such as Apple and Hewlett-Packard) or customer service/data management jobs to India. For years, outsourcing has been the norm in the world of American corporates and now, it appears that President Trump is threatening to bring it all down. He has already started working on doing a complete overhaul of the H-1b visa system, which has left the fate of hundreds of Silicon Valley workers hanging in the balance. Among the widespread panic that it has caused, aspersions are being cast regarding the steps that would be taken with regards to putting a stop to outsourcing.


A lot of company spokespersons are trying to assuage fears by stating that it would be next to impossible because manufacturing goods in the United States would mean a hike in the cost of production (owing to monumental labor costs), and thus cutting down on worldwide profits significantly. According to Andrew Rassweiler, Director of Materials and Cost Benchmarking at IHS Technology, products like an iPhone (Apple is one of the most prominent firms to engage in outsourcing) would cost around $2000 if all its components were to be individually manufactured in the US. That, needless to say, is far beyond what most people would be able to afford. Apart from the production losses that Apple would incur, it would also lose a lot of the political goodwill it enjoys from its consumer base worldwide.

From this alone, it is clear that it would be next to impossible to put a total stop to outsourcing (or to describe the term more precisely, offshoring). However, it is definitely possible to resort to protectionism. Tariffs and import duties can easily be imposed upon Chinese-made mobiles or automobiles made in Mexico  (Ford, to be precise).  That would set the US back 100 years as far as economic development is concerned; setting aside the fact that it could likely create trade wars with countries like China. This action could create political instability worldwide. the process has already kick-started with the US, under Trump, withdrawing from the landmark Trans-Pacific Partnership that had been inked between a host of countries with the aim to lower tariff and nontariff trade barriers. On the domestic front, too, the scenario would not be too cheerful with widespread unrest owing to a 30% dip in consumer spending on electronic and other goods of daily use.

Plus, here’s another point: The “rust belt” of the United States (i.e. states such as New York, Pennsylvania, Ohio, Indiana, Michigan and Illinois) were the primary swing states (a few of the aforementioned ones) that voted in favor of Trump. So, it’s not surprising that his administration would rush to fulfill its promise. However, this isn’t the fifties when the bulk of the American middle class were working in the manufacturing industry as a primary livelihood. Ever since the base of manufacturing shifted to China, rust belt workers have had to find alternate ways of living.There is a portion of this society who sustain their livelihood through assistance programs such as food stamps and others have joined the service industry. It’s an unfortunate fact that workers who do not have a college education/degree aren’t in great demand any longer in the United States. With technical degrees not as highly sought after by current American college students, there is the question as to who would be able to fill the ranks of the new (technical) jobs created by automation in various fields. The only option that companies may have is to either hire from abroad and pay relocation expenses for these skilled workers  (and let’s not forget that H-1b visa is already in the eye of the storm), or simply remain to outsource them to IT hubs abroad. Forcing these companies to get back to the pre-automation period and rely on unskilled laborers is simply not possible anymore. Manufacturing is all but dead in the USA; there’s simply no demand for home-grown workers in this field anymore. Reversing this is not just difficult, but simply impossible.

What the future holds remains to be seen, but with very real and practical concerns that surround the thorny issue of outsourcing. Considering all the facts, there’s little chance it will be stopped soon. Already a lot of foreign Silicon Valley professionals are boarding flights back to their home countries because of the new measures were taken regarding the H-1b. If outsourcing is targeted next, Trump will surely risk his credibility and respect as a president, and may possibly even have to contend with the threat of being impeached due to corporate lobbies alone in Congress who may push for his removal.