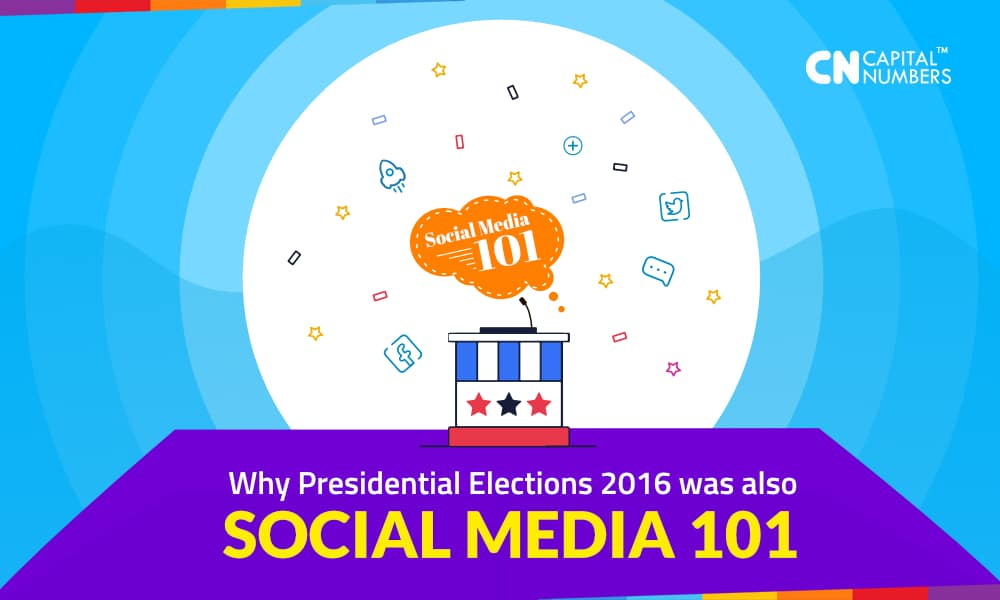 Why The Presidential Elections Of 2016 Were Also Social Media 101

If the election of Donald Trump was a revolution, then it was un-televised.

It was posted, tweeted and live-streamed.

To give you an estimate of the extent,  a survey of US adults shows that 44% reported having learned about the presidential election from social media.


Presidential campaigns are no different from brand campaigns really, so social media as a medium should not really surprise anyone. In fact, it’s nothing new. Barack Obama’s campaign was actually the first campaign to truly harness the power of social media, as it was utilized to help spread his message, gather grassroots support and empower people through engagement.

As recorded in an article, the Obama campaign reached 5 million supporters on 15 different social networks over the course of the campaign season. By November 2008, Obama had approximately 2.5 million (some sources say as many as 3.2 million) Facebook supporters, 115,000 Twitter followers, and 50 million viewers of his YouTube channel.

“No other candidate has ever integrated the full picture the way [Obama] has, that’s what’s really new about his campaign,” said Michael Malbin, executive director of the Campaign Finance Institute.

Then why is everyone hailing  Trump’s election as the “first real social media Presidency”?

There are three ways we can decode that. We study the size of social presence, the notable trends, and the overall impact. Understanding these will help you realize that social media is no longer just the medium for the message, but the driving force of any campaign – presidential or otherwise.

Let’s delve into it:

Social Media by the Numbers

When Barack Obama took office in January 2009, Facebook had a user base of 150 million, now it’s a mammoth 1.8 billion. The second most popular social media was MySpace, and Twitter closely trailed in third.

The above information might have made you feel two things:

Jokes aside, the numbers also give us a clear idea how much space social media has come to occupy in our lifestyles and culture.Still, when we look back at the numbers from the election this year, it feels surreal.

Andreas Sandre compiled these important numbers in his brilliant medium post. We’ll  leave some here for you to take in.

Election night was “the most-Tweeted election day ever, with more than 75 million global election-related Tweets sent from before the polls opened to just after the president-elect Donald Trump’s 3am ET speech,” according to a joint press release by Twitter and Buzzfeed.

CNN reported, “8.8 billion posts, likes and comments were posted between March 23, 2015, when Ted Cruz became the first politician to declare his candidacy, and November 1. The company said the second presidential debate, held in early October, was the most talked about event of the campaign. It generated more than 92 million “interactions” by almost 20 million users.”

Snapchat, “which on any given day reaches 41% of all 18- to 34- year-olds in the U.S., its younger users have been immersed in the election, too, with nearly two-thirds following it closely, according to USA Today.”

Election Campaigns have always been torchbearers when it comes to adapting to new technology and engaging in their creative usage. The usage of social media to their benefit was no different. Here are three ways in which campaigns were leveraging their social presence.

The practice of blasting the general message is done and dusted. Social gurus have been preaching about ‘vertical social media’ for some time now. The election campaigns showed the world how it’s done. Content was tailor made for each platform. No matter the volume of content distribution – using unique content for each medium, you could easily identify the platform of every candidate.

The election campaigns were high on data – and they drank it from the fire hose that is social media. Social network data, voter information and sentiment analysis were all used to drive key campaign decisions on the go. Social media also made it very simple to customize communication for micro portions of the demographic. They interpreted everything from Tweet Copy to Instagram videos to script campaign messages that were delivered by the candidates and surrogates.

Till now, the general practice in the advertising world was crafting  campaigns for traditional media, which were then adapted for digital purposes, but election campaigns are anything but traditional in this area. Most of their campaigns seem tailor cut for social and digital distribution and, if need be, the same was optimized for other platforms. From voter turnout to raising money – social media ruled all campaign agendas.

“Did social media ruin the election?”

The aftermath of Election Day can be well captured in a similar series of headlines that popped up every 2 seconds. Marketers and political pundits alike  frantically trying to post their conclusions about how social media may have been the major force to tilt the election this year.

While numbers were debated, and polls took a beating – there are some inter-related points that every sane person agreed on,

social media has brought us to the edge of a post literate, post truth world. Social media, known for being the messiah of the voiceless, apparently gave voice to the ‘fake’ and ‘untrue’ as well.  In addition, the social media algorithm formed a classic case of echo chambers that prevented people from having a full and factual picture of the scenario.

Such is the situation now – that most tech giants are being forced to understand their responsibilities as news bearers.

We can really go on and on about the impact of social media on Elections 2016. Heck, even Wikipedia felt the need for a separate page due to its unprecedented influence.

There’s a reason why everyone is documenting it, and why we have been babbling about it for almost 1000 words now. The elections of 2016 make an elaborate case for the do’s and don’ts of brands in social media.