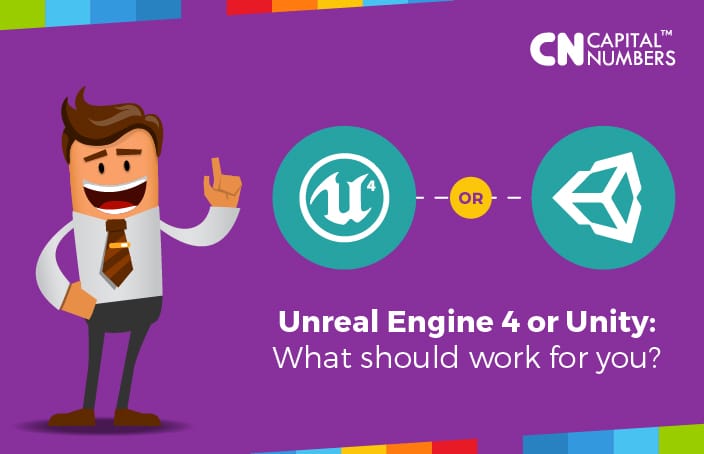 Unreal Engine 4 or Unity: Which Is Best for You?

Although many game development studio giants prefer to develop games on their own game engines, there is still a huge scope for indie developers in the market. There are many large studios, like the small developers,  that seek a decent game engine. There are many popular games like Pokèmon Go, Assassin’s Creed, Hitman Sniper, etc. that have been developed using indie game engines.

With many world renowned games in its gallery, Unity is the undisputed king among all the indie game engines, but Unity has some serious competition from Unreal Engine 4. Both Unity and Unreal Engine 4 are loaded with features and are easy to use. Both come with their own pros and cons. One could get confused between the two. Whether it is the features, interface, programming language or graphics, it might become difficult to pick a game engine between the two. Here is a breakdown of both the game engines with a focus on their strong points to help you make the choice if you happen to face the tough situation of choosing one.

Unity is much more easy to use in comparison to the Unreal Engine 4.  Unity is easier to understand and grasp as a game engine. The Unity engine is based on C# which makes game development easy.  Although the UI of UE4 was built to be as easy as Unity, it fails to match up to the level. If you try out both of the game engines, you will find that both game engines offer ease, but Unity is excellent for beginners. When you are looking for ease of use in game development, it can also come down to individual preferences. Some might find UE4 easier than Unity or vice versa. Your level of expertise and knowledge can be a dependent factor. Either way, both of the engines allow you to push the boundaries of your ideas and imagination.

Graphics and Other Features

Both of the engines now offer graphics suitable for next generation games, from complex stimulation systems to dynamic lighting of advanced level. Unity and UE4 both have advanced features to ensure high-quality game development. One benefit that Unity offers is that you can build any type of game using it.

Unity free offers many tools that are not restricted to its pro version. Unity offers many advanced and useful tools in its free version as well.

When a beginner is starting out in the game development sector, it can be very difficult. Lack of experience and expertise can add to the difficulty. Unity, having been in existence from a long time, has a very strong community. There are many tutorials and beginners can expect help at any point of time.

Unity uses C#, an extremely high-level language. This is the reason why Unity is remarkably competitive. Users of Unity can use a wide range of gaming techniques and elements. This is possible due to the programming language being C#. On the other hand, UE4 uses C++. Unity and UE4 both offer asset store for easy downloading of game assets.

Unity is a pioneer in the game engine arena introducing many things like free access. Although UE4 is easy to use like Unity, the features, and tools that Unity offers still make it the most trusted game engine in the market. Unity is faster and, with the right assets and plugins, it is the most suitable platform to develop any kind of game.