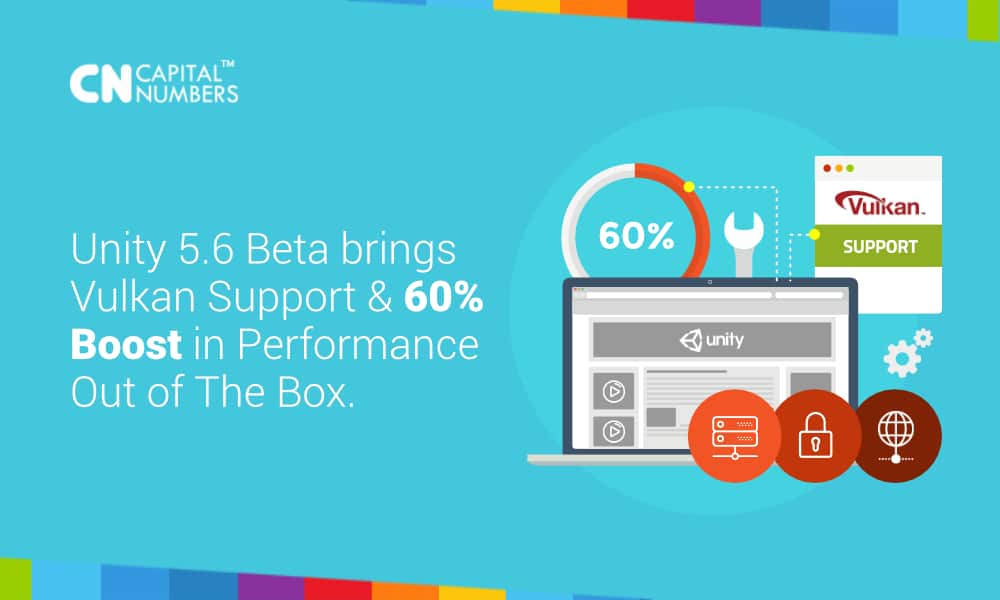 Unity 5.6 Beta Is Now Available, Brings Vulkan Support And 60% Boost In Performance Out Of The Box

Unity Technologies announced the official launch of Unity 5.6 beta recently. It will be available for all users including the users of the personal edition. Unity 5.6 beta consists of many new features and improvements that have been made to benefit the users and their projects. This beta release includes a refined editor and 2D features, a new video player, and better graphics performance. Unity 5.6 beta will also support Facebook Gameroom and Google DayDream. If you have not signed up for the Beta Program, you can do so by visiting the beta testing section on Unity3d.com. From there you can check the guide and download the installer. Let’s look into what 5.6 beta offers.

The overall graphics has been greatly improved,  including the Particle System and GPU Instancing. The new drawing function allows you to draw many instances of the same mesh using an instanced shader with arguments that are supplied from a ComputeBuffer. This new way will have no CPU overhead at all.

The company has extended the system of attaching custom data to the particles in 5.6 beta which was introduced in Unity 5.5. Metal compute support is added for iOS and MacOS. The animation system will also support tracking the view position and will keep it in place when you are navigating between the State Machine of an AnimatorController. This will avoid unnecessary scrolling. EncodeToEXR is added to Texture2D which allows the user to save the content of any HDR texture to an EXR file.

A new Video Player is included in the 5.6 beta. The video player has been built from scratch and bears hardware accelerated performance in mind. High-resolution 4k playback is now possible on even modest handheld hardware along with videos supporting alpha channel.  The user can use the video hardware capabilities of both the editor and target platforms.  The company will add supports for codecs in the future.

Facebook Gameroom is an easy way for developers to bring games to the PC. This allows them to take full advantage of the CPU and GPU.  With Unity 5.6 beta you can install your projects to either the new Facebook Gameroom desktop app for Windows as a native window player or to Facebook.com using Unity WebGL support.

Vulkan is a new generation graphics and computes API. It offers high-efficiency and cross-platform access to modern GPUs on both mobile platforms and desktop. The design of Vulkan allows it to run multiple threads in parallel by taking advantage of multiple CPU cores.  This feature of Vulkan is beneficial in reducing the workload on your CPU and leaving free space to do an additional computation. Vulkan support will improve the performance out-of-the-box up to 60%, in other words, the improvement is achieved without using any specifics of Vulkan API. If users make use of clever tweaks, they can actually improve the performance even more.  Use of Vulkan will take graphic performance to the next level in the Unity 5.6 beta. The company has announced that the final release will run on Android, Tizen, Windows, and Linux.

The Unity 5.6 beta also supports Google Daydream and has features that will improve the 2D game development workflow. There are a wide array of elements that are beneficial for the user and that improve the performance of Unity 5.6 beta.