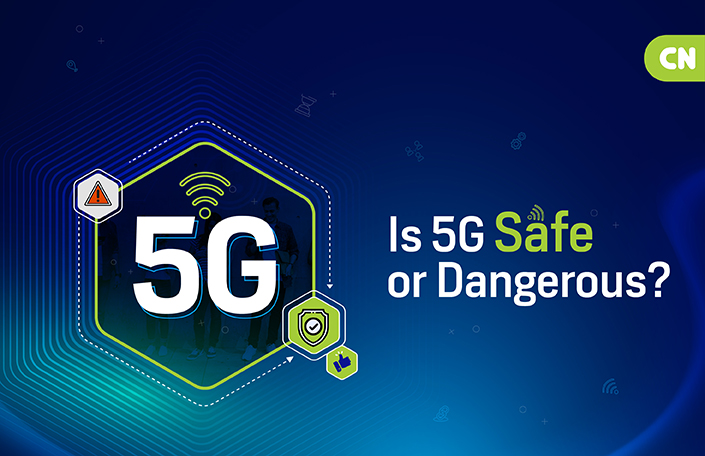 Is 5G Safe or Dangerous?

5G is here, and it’s something that a lot of people are very excited about. Faster download speeds mean you can watch movies streamed in perfect clarity, communicate quickly with people around the world, and efficiently process large batches of information.

So what’s not to like? Well, if you’re in a growing contingent of people who believe that 5G might pose a health risk for us; there’s plenty to not like.

But do you need to be worried? Is 5G dangerous? What’s the truth?

Why Are People Worried?

5G works by harnessing the “millimeter wave” spectrum. What this means is that it utilizes wavelengths that are at the higher end of the wave spectrum. This is where the confusion comes in. For one, people tend toward negative connotations of the word “radiation,” such as gamma radiation. They also might be skeptical of radio waves and ultra-violet rays, which can be harmful in certain doses. All of these are found at higher wavelengths.

There has also been a previous concern that mobile phones might cause cancer. After all, this is a form of radiation that we are subjecting ourselves to constantly throughout the day. Typically, we carry our phones in our pockets or hold them by our heads (by our brains).

And as we use 5G to increase the power of this radiation and climb up to higher wavelengths, skeptics think it might be possible that the risk of cancer or other radiation-related sicknesses might increase.
Thankfully, this concern is unfounded, as we’re about to demonstrate.

To answer that question, first, we need to address precisely what 5G is and how it works.

We’re going to get slightly technical in this section, but it’s essential to explain the science so we can draw our conclusion. So let’s get started –

Radio waves can be categorized into either high or low frequency. This tells you how quickly the electrons are vibrating – in other words, how frequently they vibrate over a certain time.

If you use a handheld radio, then this will likely broadcast on the range of 150MHz to 900MHz. These frequencies travel in straight lines, which means they can’t get around solid obstacles and they can’t follow the curvature on the Earth.

Conversely, waves at extremely high frequencies can travel through solid objects. This is why X-Rays are useful, as they will pass through the skin but not through bone. (X-Rays have a frequency of 30 petahertz to 30 exahertz). Visible light meanwhile is between 480THz (red) to 680THz (violet).

So, what frequency will 5G be? 5G is going to use higher frequencies than 4G (1-2GHz) between 7GHz and 110GHz. Most carriers will be aiming for 18-24GHz, which is ideal for short-range applications in highly populated areas.

That said, 5G will also still be using the same frequencies as 4G (Sub-6GHz) to achieve medium range.

It will also be using low band frequencies!

In other words, then, 5G is not ONLY about frequencies.

Instead, 5G is about a set of standards, as well as a combination of other technologies such as beamforming and massive MIMO.

Beamforming is a process that can direct mmWave and sub-6GHz signals right to the consumer devices – which allows for improved range at higher waveforms. Massive MIMO, on the other hand, means using multiple antennas on each base station to serve numerous users at once. 5G will also change the way that information is managed by the network and the way that data is encoded.

So really, it’s about using lots of different technologies together in a new way, which all the networks have agreed to, and are collectively called the “5th Generation.”

Do You Need to Worry?

With all of that out of the way then, the big question you need to answer is: is 5G dangerous?
And the answer is: probably not. In fact, it is extremely likely that 5G is entirely safe.

Skeptics will insist that since 5G is a form of radiation, it is entirely unsafe. However, while 5G is radiation, not all radiation is harmful. Radiation is everywhere. For example, visible light – which you are constantly exposed to – is a form of radiation. It’s highly unlikely that 5G will offer any additional danger. It is for this reason that most scientists agree that 3G and 4G are not dangerous either. In fact, research has been conducted into this very question. In 2011 the International Agency for Research on Cancer reviewed all the data and found that there wasn’t enough information to come to a clear conclusion. The most extensive studies among these did not show a link with cancer, though the organization did not rule out a possible connection.

What’s more is that there is no realistic suggestion as to how waves associated with mobile phones could actually cause cancer. The damage caused by ultraviolet light and x-rays is caused by the fact that the radiation is strong enough to “ionize” the atoms – altering the DNA within the cells. However, these are at extremely high frequencies. The wavelength despite being higher than 4G is still significantly lower than the wavelength of visible light.

The frequency at which 5G operates is only able to vibrate atoms slightly, not enough to cause any damage.

Even the planet Earth itself gives off significant radiation!

Considering that we are constantly being exposed to radiation in all forms, it’s highly unlikely that 5g will cause any significant change. 5G is probably safe. Enjoy those fast downloads!