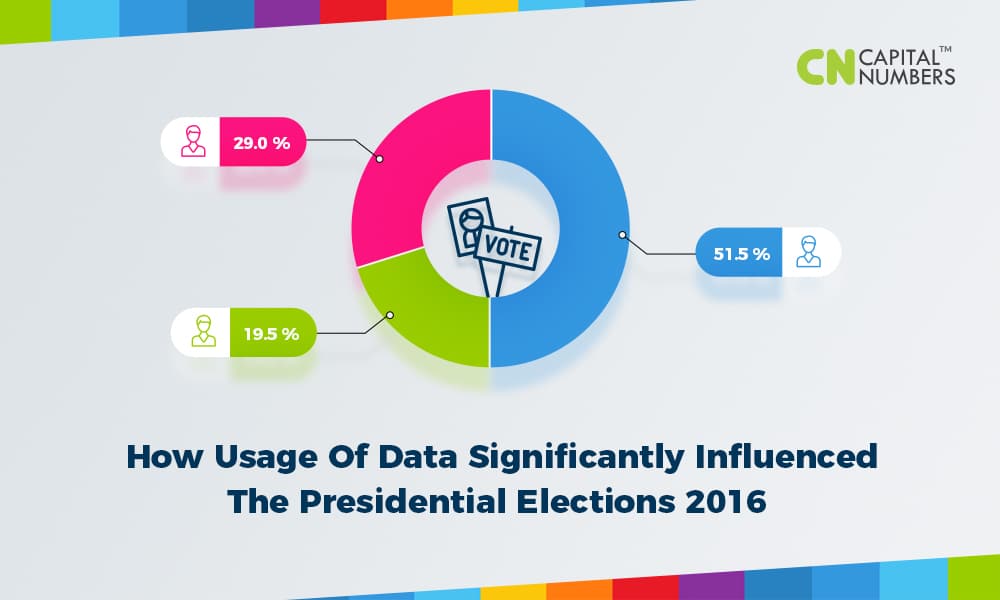 How Usage Of Data Significantly Influenced The Presidential Elections Of 2016

“There is a level of sophistication and knowledge about the electorate in battleground states that just gets advanced every four years.”

The 2016 presidential election showed that the use of data to identify, persuade and turn out voters has become increasingly nuanced and sophisticated. All roads lead to the White House, and all routes were carved by data.

Quite literally, right from the primaries, most presidential candidates used data analytics to chalk out their respective maps of the race. Then, you may ask, how did data about the same electorate tell different stories to each presidential candidate? It’s a valid question and, quite simply, the essence of data science.


If you are a marketer who is interested in figuring out how best to use data to leverage your position and campaigns, then the presidential elections of 2016 is one of the best case studies from which you can learn the do’s and don’ts from.

Let’s bring into focus the lessons that are as relevant for any marketing campaign as they were for the presidential campaigns.

#1 Data May Be Accurate, but It Can Still Be Subject to Human Flaws

Hillary Clinton’s campaign was proudly data driven. It generated dizzying coverage from tech and political enthusiasts alike. It was sci-fi(ish), to the extent that they used terms like “cost per flappable delegate”. The Clinton Campaign took the concept of micro-targeting to a level of exquisite art.

So, when she lost, the backlash over the data was swift and ruthless. Over-dependency on data was ridiculed, data did not fail; the human beings who analyzed it failed. The colossal collapse of most polls showed us how personal biases can percolate into sample biases, bad survey designs as well as several other loopholes that can ultimately paint an untrue picture.

#2 We Should Live in the Moment, Not the Past

Cambridge Analytica, the firm which informed key decisions on Donald Trump’s campaign travel, communications, and resource allocation – put out an articulate, yet the abstract explanation of how they went on to achieve the impossible.

One of the unique things that they emphasized is a real-time collection of audience data and quick response to it. They really believe (and it’s very plausible) that this gave them an unrivaled insight into where the race stood every day, as well as giving them fresh information to add to its commercial and demographic data.

#3 Marriage Between All Kinds of Data Nets You the Winner

In an article from what feels like a prehistoric era now, May of 2013, Wired magazine gave us a simple formula:

They hit the nail on the head. The winning campaign apparently benefited a lot from fully integrated teams carrying out research, data science, and digital marketing. In fact, as the Cambridge Analytica proclaims, “Their workflow created a circular learning process. Field surveys directly influenced the data modeling. In turn, it built audiences for digital marketing, TV ads, mail and other engagement. Field research then tested the effectiveness of voter targeting, which adapted and improved accordingly. This circular process meant the campaign was constantly learning and improving its outreach.”

These are exciting times for data, but numbers are what we make them be, and the presidential elections are just one of the many testaments to that. If out of all lessons, there’s one that we would strongly preach, it would be about the need for data science to be client specific. A proper understanding of history, premise and context are imperative in building a watertight data informing system.