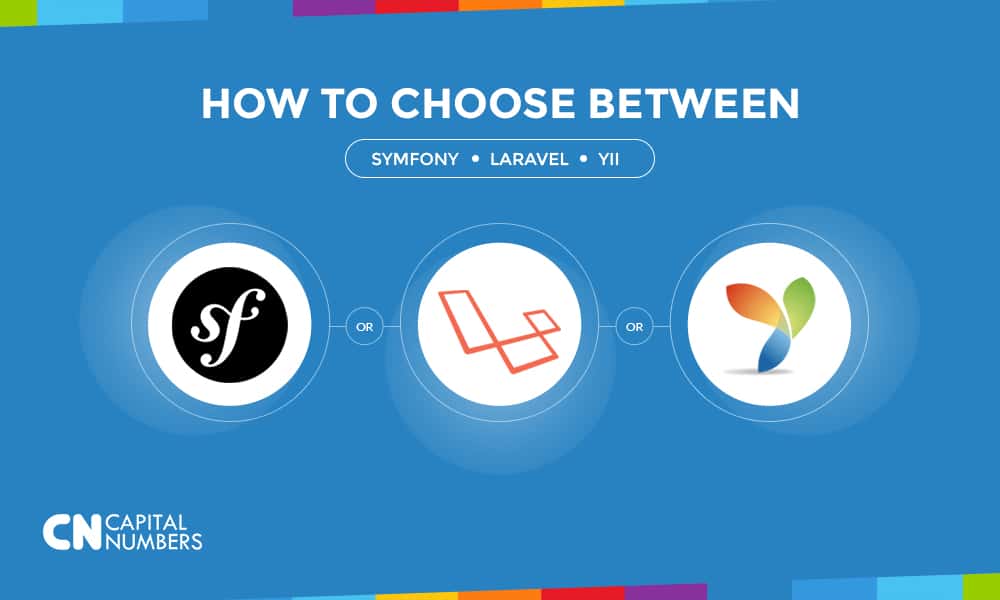 How to Choose Between Symfony, Laravel or Yii?

PHP (Hypertext Preprocessor) is a widely-used open source general-purpose server-side scripting language that is especially suited for web development. With the latest introduction of PHP7, a revolution has been created in the way we deliver applications that power everything from websites and mobile to enterprises and the cloud. PHP7 has brought explosive performance improvements, drastically reduced memory consumption, and a host of brand-new language features to make your apps soar. 82% of the websites are developed using PHP and few of the most popular websites are Facebook, Wikipedia, Yahoo, Flickr, Tumblr, and WordPress. It is with this, that we come straight to the point. Programming is an art and using a framework streamlines application development by automating many of the patterns employed for a given purpose, adds structure to the code, prompting the developer to write better, more readable / maintainable code and ultimately makes programming easier since it packages complex operations into simple statements. The top 3 best PHP frameworks are Laravel, Symfony, and Yii Framework. Our task is to make an educated comparison between the three and decide on the best choice out of these.


How Should We Compare?

Before we get down to actual comparison, we need to look at the criteria, based on which, we need to weigh the platforms:

So, let’s begin the comparison:

As far as Web 2.0 applications are concerned, all three frameworks are equally efficient. Templating engines are chiefly used to make the job of coding easier (especially those ends, which are front-end in nature). These engines provide the feature of automated HTML muting and filtering, which is yet another reason for an average programmer to desire a PHP framework, with the best templating functions.

Main Differences Between the Frameworks:

The chief differences which exist between these three frameworks (other than the ones described above) lie in the strength and resilience of each framework.

Now, we come to the installation part. A huge advantage here is that all three frameworks can be installed via the use of Composer, and hence, is all hassle-free to install. Still, let the differences be underlined:

As far as performance, development, learning curve and database/community support is concerned, we have to look at the following:

In conclusion, we can only say that all three frameworks have uses and applications of their own, which no other framework can possibly match up to. Symfony offers LTS release, is the most stable out of the three, is component-based and has great learning resource. Yii has Ajax support, is great for developing real-time applications, and is the best when it comes to creating Restful Web Services. Finally coming to Laravel, it is currently the most popular (’15-’16), offers the best support to Composer for package management, has the best packages and deals for framework functionality extension, and is great for unit testing. So, study all the merits of each one carefully, and take your pick.