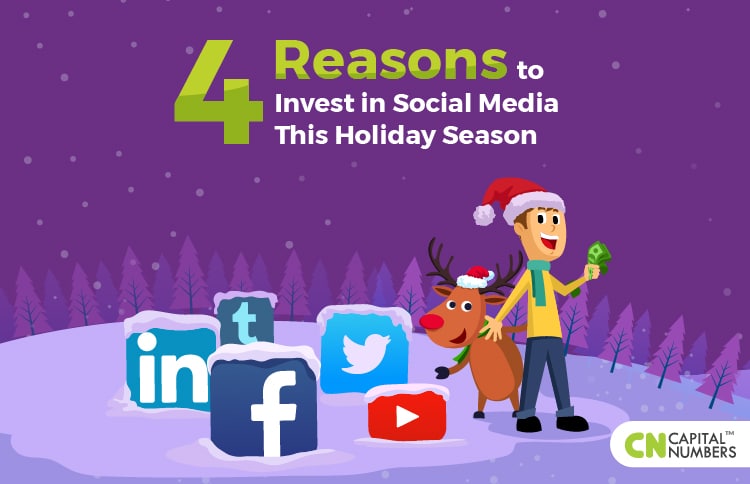 Four Reasons to Invest in Social Media This Holiday Season

Social Media and digital marketing isn’t going anywhere. It’s here to stay for a long, long time. The smartest and most savvy brands have carved out a presence for themselves all across social media, and they’re using it to leverage enormous growth this holiday season. How? By listening to their customers, driving engagement, and deploying holiday-themed content.

Your Customers Demand It


Further, most people are more likely to buy from a brand they follow on social media. So if you are positioned to have high engagement, then you’ll be in a good situation as we head into the holiday season. People will be more receptive to your offers, you can run holiday-themed ads, generate engagement with questions like “What’s on your kid’s Christmas list this year?” and more.

Back before the internet and social media took off, advertisers knew that word of mouth was one of the most powerful ways to make a campaign or a brand “stick.” Now, social media has supplemented and in some cases supplanted that entirely; friends sharing your pages, posts, and content on social media is a powerful way to spread awareness and build trust.

It’s almost as if you’re becoming their personal friend. Think about it. Who do most people follow and like on Facebook? Family and friends. They want to see your content and your right alongside people they already like and trust. So not only are you popping up on their feed every day, but they’ve chosen to put you there — which means they’re very likely to eventually buy something from you!

If you want the best for your customers, then show them! They’ll never be able to take advantage of great holiday deals and timely offers if you don’t put it in front of them. And the best way to put an offer in front of someone is to have it show up on their social media.

Reach Out To Your Customers

To paraphrase to social media giant Gary Vaynerchuk, “Deploy $100 against Facebook ads, and you will attain reach.”

In other words, you never have to worry about reaching your target market ever again — with social media advertising, you can now laser-target a segment of your market and deploy ads specifically for that market. Not only does this save you a load of ad dollars, but it can dramatically sharpen your message, which lets your brand become much clearer. By relentlessly testing your FB ads and offers, you can drastically improve your ROI while growing your followers in the process.

Multiplying your advertising across social media allows you to test what works and what doesn’t, find what works for you, and double and triple down on the results. By doing this quickly, you’ll be able to reach your audience with high-performing ads this holiday season, in time for shopping holidays like Black Friday and Christmas.

You also don’t necessarily need ads. A good social media manager will be able to reach your audience through the power of engagement. Although this method may be slower, it has a very, very high ROI as you’re only targeting customers who have already expressed interest in you. Although you might not have the time to try to build a following on every platform, your social media manager should at least focus on Facebook, Twitter, and LinkedIn.

It’s super easy to create event-specific deals on Social Media, and it only takes about ten minutes. Contrast that to the slower way of doing things: mailers, emails that might get sent to the spam folder, and mass media advertising through radio or commercials. Social media is so much faster. Using Facebook ads or something similar, you can offer holiday deals to hundreds or thousands or hundreds of thousands of people and get an instant response.

This is especially important for gift-giving holidays, because you can also use social media to market items as either gifts or personal items. You can set up two-for-one deals, encourage “impulse buys,” or advertising that your customers “get a little something” for themselves as well as a gift. You can market matching items or gift sets. The possibilities are endless…and again, on social media, the response can be instant.

Finally, research has shown that people share 26% more posts during the holiday season than at other parts of the year. What does this mean for you? It means that will a some savvy, a good social media manager, and some luck, you can time your posts to go viral around the holiday season.

Well, if that’s true, then engagement is the kingdom. If you have good engagement, you can simply post an offer on social media and drive thousands of dollars in revenue within the day. That’s the power of engagement: it drives likes, shares, views, and finally, purchases. However…

Posting only once a week, or even once a day, probably is not going to cut it!

If you do end up growing your engagement that way, the growth will be terribly small — when it could be fast. And in the shifting landscape of social media and technology, being slow is like being nonexistent. Your competitors will outperform you, your growth will stagnate, and you’ll be constantly chasing customers instead of letting them come to you. And it gets worse…

Often, businesses don’t have time to drive the engagement. If they’re already putting in eighteen-hour days, then planning and queuing up posts to drive engagement on social media seems like a pointless, tedious, and ultimately fruitless endeavor. Even if you have a dedicated social media manager, they have to manage all your campaigns, several different platforms, and a ton of content, questions, comments and reviews. If you have only one social media manager handling all this, the results can be dire.

Because holidays are the busiest time, you may look to supplanting your social management with an outsourced team. A good team will help get you those likes, shares and comments, expanding your reach for the holidays and putting you in a great position for 2018.