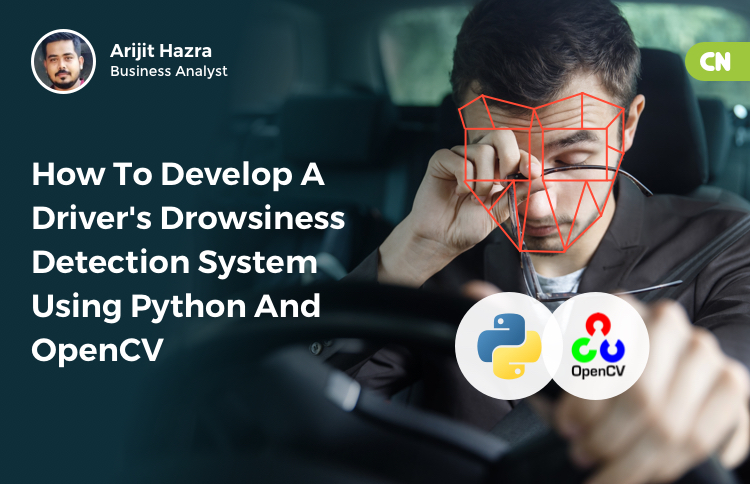 Numerous drivers drive their car, bus, truck, goods vehicle, movers during day and night time, and often they suffer from lack of sleep. According to various studies and reports, fatigue and drowsiness are some of the leading causes of major road accidents. The automobile industry and fleet management should think about their safety and security measures, and to attenuate this issue, they must implement the Driver’s Drowsiness Detection system into those vehicles.

The basic purpose of the system is to identify the driver’s facial condition, and if the driver is feeling drowsy, then the system will trigger a warning output in the form of alarm the danger bell or inform the passengers. The complete system can be deployed on hardware and can be installed in any vehicle.


How the System Works

The system analyses the driver’s consistency while driving in the form of various body movements, posture, steering input given by the driver on a certain time interval. Considering these scenarios, the system starts analyzing the other parameters like- speed, weather conditions, humidity, etc. A camera that is installed in the device is used to repeatedly records the facial behavioral landmark and movement of eyes and lips of the driver. Because of the eye closure period for sleepy drivers are longer than normal eye blinking.

Through that live video streaming, a frame is extracted for image processing. Images are captured typically at a fix frame rate of 20fps. Using the image and annotation data set, the system understands the position the driver is feeling sleepy by measuring the coordinates of the right and left eye, nose, mouth, left and right ear brow. The human visual context somehow represents the feature of the scene with a few valuable information in it.

Using Python interpreter and several OpenCV libraries, the algorithm picks out specific, distinguishing details about a person’s face and extract those meaningful feature form the images. Usually, it takes grey images of the object as input and then identifies the driver’s condition based on a preset condition for drowsiness using the eye aspect ratio. Once the system detects any abnormal movement of the driver, it will alert the driver, passenger, or fleet controller form of alarm, warning popups, vibration, etc. The entire system can be implemented using Raspberry-Pi.

How to Develop the System:

This IoT based application can be developed and easily used in smartphones.

The mobile can also be used in several purposes like-

Accident Detection– Whenever an accident is detected the hardware will notify the app and then the app will send messages with the GPS locations to the hospitals.

Vehicle Theft– Through the same application can also be utilized for the protection of the vehicle is stolen.

There’s no denying that we’ve all been victims of drowsiness while driving, especially after a short night’s sleep or during long journeys. But we often don’t realize that it can lead to dangerous situations and road accidents. Driver’s Drowsiness Detection system plays a really important part in such cases and it can keep hazardous situations and fatalities at bay. We swear by the proverb – ‘Prevention is better than cure.’ And you?