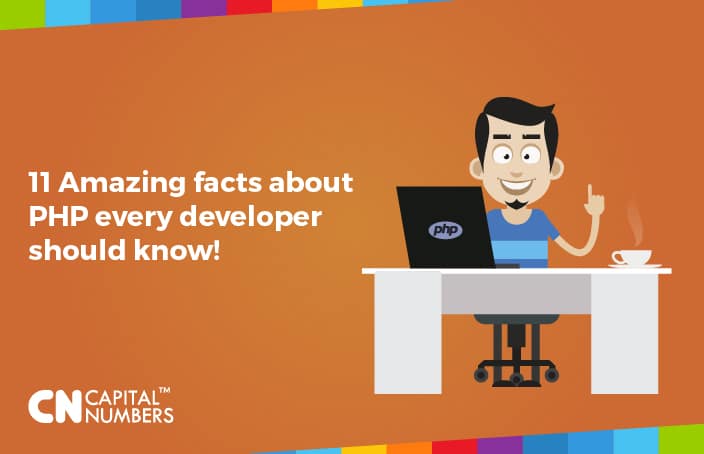 11 Amazing Facts About PHP Every Developer Should Know!

A popular server-side scripting and general-purpose programming language today, PHP, was originally created by a Danish-Canadian programmer named Rasmus Lerdorf. Although the stable release of PHP only happened on April 12, 2017, it has been around for twenty-one years, as it was first developed in 1994.

There are many benefits that  PHP offer. The PHP code can easily be embedded into HTML5 markup or HTML. PHP codes can be integrated with a wide range of web frameworks, web content management systems (CMS) and web template systems. The PHP interpreter is powered by the Zend Engine, an open-source platform. If you ask a programmer or webmaster, they will probably tell you that they already have the basic knowledge and understanding of this popular language. But there are some facts about PHP that haven’t been revealed to most programmers and webmasters. Here are 11 of the lesser-known facts about PHP.


As was mentioned in the beginning of the article, PHP was first introduced in 1995. It was developed by Lerdorf to manage his own personal website. He was trying to create a Common Gateway Interface (CGI) to work with web forms at the time he was developing PHP. Lerdorf made the surprise revelation when he had an idea to write a programming language while he was developing PHP. He took the next logical step.

PHP was originally used to build simple, yet dynamic web applications and to communicate with databases. It also helped in bug reporting and in improving the codes. It was only later that the language, as well as the meaning of PHP, evolved.

Although it is a very widely used programming language now, it was not until 1997 that PHP became “Hypertext Preprocessor”. Zeev Suraski and Andi Gutmans rewrote the original software component (parser) forming the base for PHP 3, which went to be publicly tested and then officially launched in June 1998.

The core of PHP was rewritten by Suraski and Gutmans. Zend Engine was produced in 1999. The new and changed PHP was then released in May 2000, powered by Zend Engine 1.0. PHP 4 continued to develop until the version 4.4.9. Since the release of that version, there haven’t been any more updates.

If you thought mascots are only for sports teams, think again, as many programming languages like PHP, Java, etc., have their own mascots. PHP has a big blue elephant as its mascot. The name given to the PHP mascot has been strategically modified to elePHPant.

Although the actual number of PHP developers in the world is not clear, Zend recently estimated that there are more than 5 million PHP Developers.

PHP is available for free, but there are certain restrictions. These restrictions prevent it from being distributed under the General public license. For example, if a product is created from PHP, it will need permission from the PHP group to contain PHP in their names.

With PHP 7, PHP is ready for the next generation. The performance of PHP was improved through refactoring, which was initially named as PHP Next Generation (phone). It was authored by Xinchen Hui, Nikita Popov, and Dmitry Stogov.

Some of the largest online brands, such as Facebook, Flickr, Yahoo, ProProfs, Technorati, Digg, and Friendster are all powered by PHP. Popular sites like Wikipedia.org, WordPress.org, Weibo.com, Twitter.com, Qq.Com, Taobao.com, etc., are using PHP.

These are some of the amazing facts about PHP. Over the years, PHP has developed and become what it is today. The language has grown to meet the needs of developers and webmasters using it today. This evolution makes it clear why PHP is so prominent in the industry.