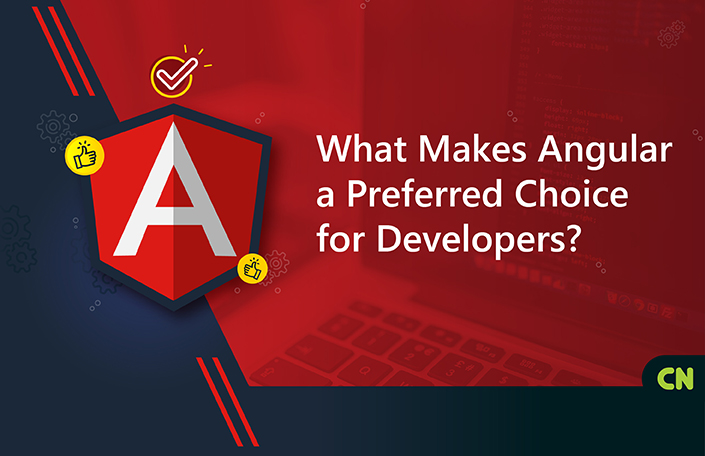 What Makes Angular a Preferred Choice for Developers?

Many believe that AngularJS is the ‘golden child’ among JavaScript frameworks since Google launched it in 2012. The intent behind creating Angular was to make the front end development process a cakewalk.

It was an instant success since its launch. Keeping note of this success and immense popularity, Google released multiple versions of this framework, with its last stable version being Angular 8.

Today, more than a million developers extensively use Angular worldwide

Owing to the constant support from Google and its broad community forum, Angular is always kept updated. And needless to say, developers love it.

This is a major release from Google, which offers new APIs for tapping into the CLI, enhances app start-up time on modern browsers, and aligns the framework to advanced web standards.


In short, it is powerful, has a great ecosystem, and is really cool.

Currently, it’s a top choice for developing enterprise-grade apps that are highly dynamic and responsive in nature.

Let’s elaborate on some of the features which make Angular so popular globally:

To sum up, when it comes to a performance boost in front-end development, Angular, is a preferred choice for developers on a global level, thanks to the above features.

And the good news is that Google will make site development easier, simpler, and better for the developers with its upcoming launch – Angular 9.

The New Kid on the Block – Angular 9

In the Angular 9, set to be released soon, the Ivy next-generation compilation and rendering pipeline is the default. Ivy is likely to generate code which is easier to read. It is also expected to ease out debugging at runtime, offer better re-builds, and enhance payload size.

There are changes related to property binding in Ivy as well, which would speed up the processing time.

Keep an eye on the latest in the world of this JS framework to level up your Angular game.

If you truly want to create high-performing enterprise apps, use Angular to its full potential.