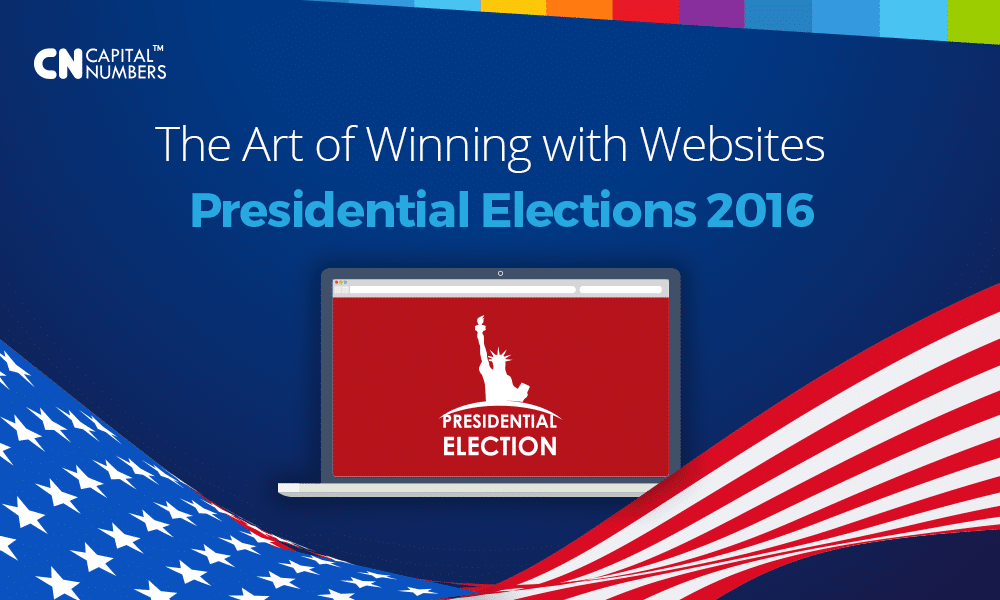 The Art Of Winning With Websites – Presidential Elections 2016

Legend has it that the presidential race between Richard Nixon and John F. Kennedy pivoted on a single night. September 26th, 1960, for the first time ever, a presidential debate was broadcasted on national television

“What happened after the two candidates took the stage is a familiar tale. Nixon, pale and underweight from a recent hospitalization, appeared sickly and sweaty, while Kennedy appeared calm and confident. As the story goes, those who listened to the debate on the radio thought Nixon had won. …Those that watched the debate on TV thought Kennedy was the clear winner. Many say Kennedy won the election that night.”


Fifty-six years hence, television is no longer a game changer, but the powerful influence of technology over presidential campaigns and communications has only progressively increased.

That exponential growth is evident when we look at the role of websites within the presidential campaigns.

Despite their different stances on issues and their widely different personalities, we must acknowledge that both Hillary Clinton and Donald Trump had eyes on the same prizes.  They wanted to raise funds, gather and influence potential voters, and then ultimately drive them to the polls, where voters would choose them over their rivals. Arguably one of the major ways in which they sought to gain these prizes was through their websites.

Websites are the backbone of any and all content strategy in the digital world. Like brands, candidates treat their websites as extensions of their personalities, their promises, their claims, their wishes and their ultimate message to voters. Studying the websites of candidates is thus heavily beneficial to those who are looking to catch scalable and sustainable trends in online marketing.

Even though the bare structure of the websites of both Clinton and Trump are similar, they are still distinguishably different. You don’t need to be an expert to figure out what is different. You just need to look at them carefully.

Clinton capitalizes on fun, vibrant design and sophisticated functionality, specifically directed towards the younger progressive audience that she was trying to appeal to.

Trump, on the other hand, plays around with bold ideas and classic themes – directly in sync with the conservative audience that he was appealing to.

From the color selection to the font, to the linguistics – every little thing on each website is a reflection of the demographic that the candidates wanted to speak to the most. Audience data, knowledge about demographics and regular engagement also evoked real time changes in the websites of both candidates.

UX Is the New Handsome

The campaign experience is much more complicated now. It’s relentless, persistent and exhausting.  In the past, it was about candidates speaking to the public in person or on TV, but now it is that and much more. The campaign experience is now twenty-four hours a day, seven days a week. The candidates speak to the public all the time, through social media, through television, through distributed content, through appearances, through their choices of allies and even through their clothing choices. All of this information and experience is calibrated and culminates into the website.

The user experience of the website is as important now as for how looking good on TV was in previous times and the campaigns are well aware of this. Clinton, for example, sports a website that’s built with mobile-first best practices. Its contextual navigation helps tell an engaging story. Trump’s website is mobile responsive as well. On top of this, it’s lightning quick because it’s primarily text and isn’t as populated with multimedia content such as his rival website. It may not be as enjoyable from the modern web perspective, but it works with its audience. The results stand as a testament.

A Tool That Changes Shape

Everything about the presidential race was about being efficient and effective. Any need for changes was recognized, acknowledged and implemented within a matter of hours. That same process was reflected on the website. So, it’s natural that these websites were agile and quite scalable. The most interesting part about this was how the website platforms were used to churn out the most engaging and interesting content. For example, Clinton used her website homepage as a real-time fact checker during the first debate with Donald Trump in an effort to combat, what the Clinton team felt, was Trump’s ways of evading the truth. You can also check out the Birthday Chronicles that her team created on Clinton’s 67th Birthday. The tool engaged users by telling them to celebrate Hillary’s birthday by seeing what she was doing the year they were born.

There are much more highlights of websites, like the great integration of social media and clear line CTA’s (Call To Action) of both campaigns as well as the websites of the candidates who didn’t make it to the general elections. They implemented some of the best ways to achieve their targets and goals.