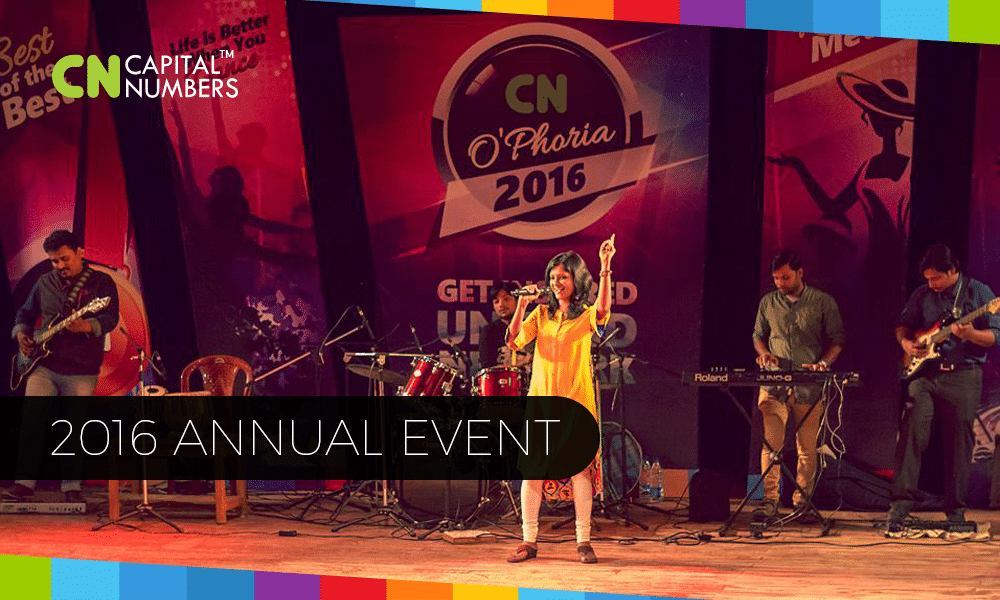 Capital Numbers celebrated its 1st Annual Event – CN O’ Phoria 2016 with great zeal and enthusiasm on Saturday, 17th December at Rabindra Tirtha. The fun fiesta was a great success. Thanks to the generous supporters. Over 200 attendees gathered and enjoyed the night. The program commenced at 3 PM. The entire function was greatly hosted by Shovan, Indranil, and Vijaya. The inaugural dance was performed by Sutapa, Rituparna, and Gargi. A glittering bonanza of skits, dances, jamming and music depicting extra-curricular prowess of the participants were staged.

The dance floor was put on fire with one performance after another from Sutapa, Rituparna and Gargi. They got the much-needed support from the other two male members of the group, Tapas, and Joydeep. Melodious songs from Avin, Prantika, Satyaki, Sumana and Sayantani did not fail to capture hearts. Every participant gave their best to make the event a grand success. They deserve a special mention for their hard work as they all practiced and researched off hours and during lunch breaks.

After a small refreshment break, the stage was graced by the Managing Director of Capital Numbers Mr. Mukul Gupta, Mr. Anindya Mukherjee (Co-founder & Director of Operations), and other senior members of the management Mr. Pushpal Mazumdar(Solution Manager) and Mr. Subhrajit Das (Co-Founder & Business Process Head). They were later joined by all the respective Department Heads. All of them showered their appreciation on the employees and gave away the awards to the Key Contributors and Shining Stars.

This was not the end. There was more to come. The stage was again lighted up by a jamming session which was incredible followed by a comedy act by Satyaki and Utpal. Their comedy act made everyone roll in their seats. It was time to go back in time as the stage was about to come alive with stars from the yesteryears. From Raj Kapoor to Ranbir Kapoor, the Retro to Metro act was a tribute to some of the hit Bollywood couples. The audience was happy to see some of their favorite stars being enacted by their colleagues and team members that included Meenakshi, Abhijit, Shreyasi, Utpal, Satyaki, Somrita, Snigdhadip, Sutapa, Joydeep, Rituparna, Tapas, Sayantani, Shovan, Sumanta, Arup, Rituparna, Shabbir, and Sonali.

This act brought the curtains down on the function at 7 P.M. which was finally wrapped by a dinner arranged on the sprawling lawns of Rabindra Tirtha.