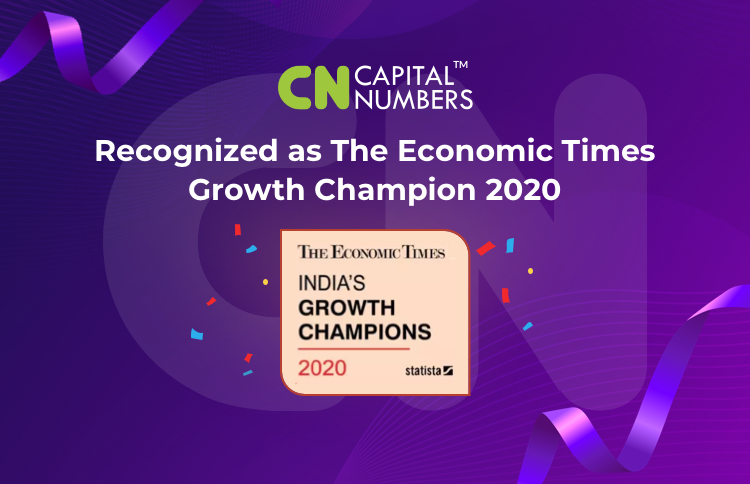 Capital Numbers grabs the spotlight as it gets recognized as one of India’s growth champions by The Economic Times and Statista in 2020.

Clearly, it’s rapidly growing and how!

This breakthrough success of the company is a testament to its 100% dedication to delivering nothing but the best.

It’s rare to find companies that innovate and grow fast within a short timeline. Capital Numbers is one of the few that has shown remarkable success with a staggering 61% Absolute Revenue Growth within a span of just three years. A huge feat in itself, it is proud to be one of the top changemakers of the country today that has contributed to India’s economic growth through its stellar performance.


Capital Numbers has already been announced as a top software company by GoodFirms, Clutch, and Deloitte. Added to this, the high-profile acknowledgment of the company by The Economic Times and Statista simply reinforces the fact that it delivers real value to its customers with its proven expertise.

The inaugural edition of India’s growth champions put forth by the joint initiative of The Economic Times and Statista aims to highlight the real gems or economic accelerators of the country. It lists companies with outstanding achievements and good revenue numbers from across sectors such as Technology, Food, and Beverages, Construction, Financial Services, Industrial Goods, etc. This mega-research project was conducted to identify, laud and appreciate companies that have undergone a mercurial growth in the last few years.

This initiative involved a registration process where the companies had to share their revenue figures along with the headcount from the years 2015 to 2018. The companies had to be independent entities demonstrating organic growth to qualify for this list.

The research team combed through diverse data sets from multiple sources to select only a handful of champions that truly helped speed up India’s growth. Capital Numbers is proud to be one of them that has helped accelerate India’s economic prosperity.

Becoming highly profitable within a short time isn’t an ordinary task. And Capital Numbers has proved that such goals could be realized through an unwavering commitment to excellence. Today, it is a key player in the technology space, offering niche solutions in areas like:

The company has already delivered over 1500 projects to more than 100 businesses located all across the globe. Today, it is a strong team of 400+ in-house specialists who deliver top-notch technology solutions to its broad client base that includes biggies like Reuters, Conde Nast, and Flipkart along with several other Fortune 500 giants, SMEs, startups, and agencies.

Its agile work processes and strength of products have helped Capital Numbers maintain a 100% client retention rate and become a trusted partner to multiple businesses. Today, it is a critical economic stimulant and a true champion in every sense.

The company is proud to have received this recognition and aims to retain this gold standard of growth and excellence in the years to come.