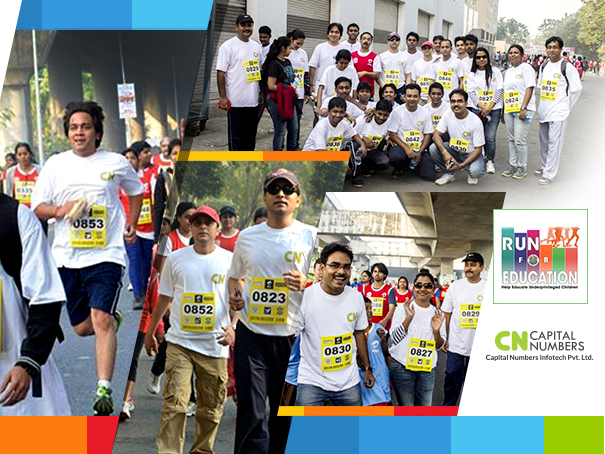 A winter Sunday morning is usually a lazy one, when you hardly feel like pulling yourself out of the blanket, and getting your hands and legs to work. But the last Sunday of November was different for a few from Capital Numbers. Around 33 people from the company participated in the charity run, organized by Airtel, named as “Run for Education”.

There were over 5000 participants who took part in this charity run of 10 KM and 5KM respectively. Each candidate had to undergo a paid registration process for participation. The entire money collected through this charity event would be utilized for the education of underprivileged children.


Capital Numbers participated in the 5KM run. T-shirts with the company logo was specially designed for the participants who choose to support the cause. The run started at 7.30 in the morning from City Center Salt Lake. Meandering through a 5KM stretch in Salt Lake it ended around 9am at the same point from where the race started.

“It is a great idea to run for charity and raise much needed funds for a good cause. At the same time we all are all giving back to the society much to our ability, raising awareness and staying in shape along the way”, said much enthusiastic Mukul Gupta, Managing Director of Capital Numbers.

Mukul completed the 5 KM race in 45 minutes and was still feeling fresh. “It is this great feeling when you try your best bit to help such a great cause. Education is every child’s right, and we must help them to gain at least basic education”.