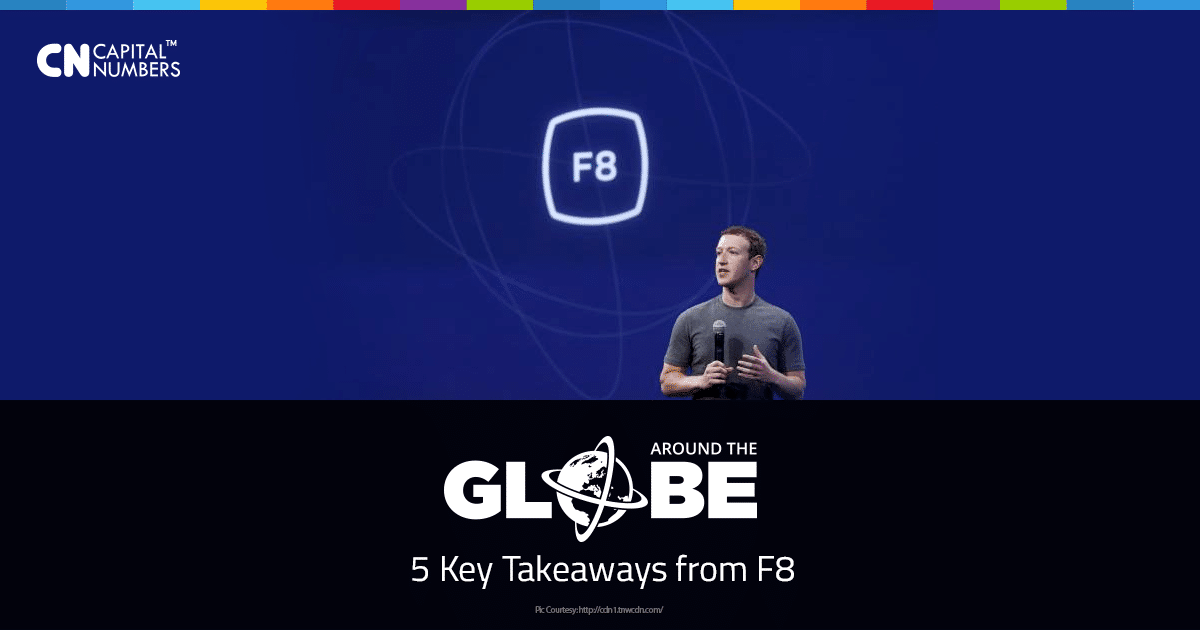 Each week, in our segment “Around the Globe”, we curate a list of recent & significant tech updates that have potentially far reaching consequences. This week we are concentrating just on Facebook’s Developer Conference – F8.

We do so because Facebook’s offerings (and we not just talking about the social media platform here) form a large part of our lives. A lot of our interactions, expressions, discoveries and even commerce is being shaped by this tech giant. So it’s only prudent to take good note of the new possibilities that the company promises to usher in. This year’s sessions featured leaders from across the Facebook umbrella of apps and services. We got to learn about the latest tools and best practices for designing and building an app. They even spoke about new surfaces for discovery and expression and innovative ways to make the world more open and connected. Following are the key takeaways from the conference:

This may easily be considered as one of the biggest announcements in the conference. Facebook just announced that it will allow businesses to deliver automated, e-commerce guidance, content and interactive experiences through chat bots in Messenger.

As most tech experts believe bots have the capability to replace the toll free numbers and many call centres.  We will talk more about how we can put these bots to effective use in a later blog.

We had known for a while that Facebook is betting high on Virtual Reality with Oculus. But now it promises to change who you spend your time with completely with its “social VR”. Mark Zuckerberg even said that Virtual Reality has the potential to be the most social platform.

Facebook CTO Mike Schroepfer stood on stage in front of a live audience in San Francisco, put on one of Facebook’s Oculus Rift virtual reality headsets and “teleported” to London. There, he met up with another Facebook employee, who was actually wearing his own headset at the company’s Menlo Park, Calif., headquarters.

Facebook is releasing a slew of new developer tools to help people design, develop and monetize their apps. Some of them are

Quote Sharing:  Developers can now add a button that automatically pulls a quote, or surface the button when people highlight text so they don’t have to copy and paste.

Customizable Push-In App:  Developers can now run push campaigns to pull people back into their apps, and help them navigate to new content or options while they’re already inside.

Facebook is giving developers and publishers to see how they can add to the immersive and interactive live video experiences on Facebook. The Live API can seamlessly incorporate Live in a broadcast setup of their choice and also create new ways of interaction. Read official blog here: https://media.fb.com/2016/04/12/introducing-the-facebook-live-api/

Facebook will now allow all publishers the provision of Instant Articles. Until the F8 conference, Instant articles were only available to a handful of publishers. These were introduced in May 2015 as lighter versions of articles that open almost instantly. One of the great advantages of these Instant Articles is that, you don’t have to juggle between apps to keep up with your reading.

All in All, F8 was eventful to say the least. Apart from the 5 takeaways that we have highlighted, there were several other announcements that some way or the other will affect our lives. Follow our Twitter handle to be constantly updated with all of that.