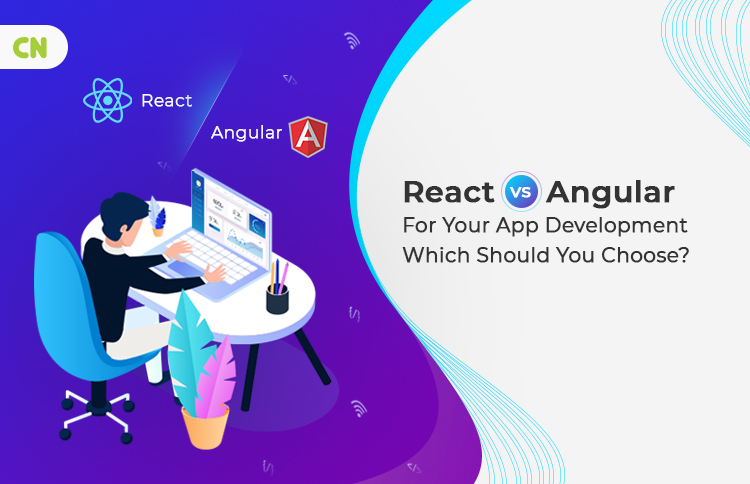 React vs Angular For Your App Development… Which Should You Choose?

If you’re creating a web app and you want to give it a smooth UI with minimal code and fuss, then you might consider using either Angular or React. These are used by some of the biggest brands and apps you use online every day, and chances are you can use them too.

But what are the differences? And which is right for you? Let’s find out.

AngularJS is an open-source front-end web application framework – a tool that is used by Google, among others to power many of the most powerful and popular web applications that we use today. AngularJS allows for seamless integration of HTML and JavaScript elements to provide an intuitive method for building complicated but highly modern and functional websites.


While AngularJS is technically regarded as a framework, it is lightweight enough that it is often mistakenly described as a library. This lightweight nature makes it ideal for numerous scenarios where bloat is to be avoided. It is also a server-side tool, meaning that it runs on the servers before being displayed in the browser. That means the user’s computer or device doesn’t need to do any computation, which in turn means that it will run equally well on any mobile, desktop, or other machines.

Angular JavaScript has mostly been replaced with simply ‘Angular 2’. You’ll hear different names used to refer to the Angular Framework, but the result is the same: an Angular App is a web app that can provide powerful interactive functions.

Perhaps one of the best examples of a highly popular web app to use this tool is PayPal. Others though include Netflix, iStock Photo, Freelancer, The Guardian, and even Google AdWords.

As you can see, the tools range from basic websites with paid membership and subscription options (and no doubt beautiful backends) to sophisticated multimedia tools that will also leverage numerous other scripts, APIs, libraries, and tools to integrate seamlessly.

ReactJS meanwhile is a library, meaning that it provides a set of additional features to your regular JavaScript programming, revolving specifically around the creation of dynamic user interfaces.

React uses a combination of JavaScript and JSX and is commonly used to build reusable HTML elements for front-end UI and to handle the view layer for single-page applications. React elements can also be natively ported to iOS and Android apps.

With React, a developer can handle changes to data without needing to reload an entire page. React is fast, scalable, and extremely simple to get started with.

Choosing Which to Use

So, which is the right choice for your project? Which should you learn? Or what kind of developer should you hire?

One of the key distinguishing factors is that one is a library, and one is a framework. As a framework, Angular is a little more rigid in the way that it structures your projects and is, therefore, less versatile. You’ll be taking a certain amount of pre-existing boilerplate code and scaffolding and then adding your customizations to that. While this does negatively impact versatility, it also means that Angular may be quicker to get started with. Right from the get-go, you’ll have templates, dependency injection, form building tools, and more.

The TypeScript programming language used by Angular also helps to keep your code clean and easier to debug. This is a very light framework remember, so it won’t bog down your app. And the hierarchical dependency injection used by Angular means that the code elements of your apps will run faster.
.
Keep in mind that with so many ready-made elements and APIs included in your project, there is a lot to learn with Angular. If you have ever tried to get to grips with the Android SDK, then you will be familiar with Google’s habit of introducing a thousand new things every year and expecting developers to keep up. You’ll need familiarity with templates, pipes, RxJS, dependency injection, TypeScript, and more.

Conversely, React is a library. You can choose to call upon whichever libraries you want and ignore the rest. That said, you will need to familiarize yourself with JSX, a markup language that allows you to insert markup into your JavaScript code. This streamlines the development process and simplifies matters by putting everything in one place. These combined elements are referred to as components, and the inherent modularity of these components also makes it easier to reuse elements in future projects.

React also leaves the developer responsible for things like file hierarchies and updating. With more to consider, there’s a lot more that can go wrong. In short, then, React leaves you with more power, but with more power, comes more responsibility. It may be of interest to note that Facebook uses React much more than Google uses Angular. (And, React fiber is going to make React even faster soon).

Perhaps more important is to ask how your choice is going to affect the end product and the experience of the end-user. One of the most appealing aspects of React is its use of virtual DOM rather than the regular DOM used by Angular.

Virtual DOM means that when data is updated on a page, React will only make changes to the necessary HTML code. However, Angular will update the entire structure of HTML tags until it gets to the data that needs to be altered. Thus, React is quicker to reflect changes.

With Angular being Google, your apps are likely to adopt a Material Design type aesthetic by default. If you like the look of Google’s apps, and you want your apps to be compatible with Google, then you might consider this option.

Material Design ensures a certain amount of familiarity and inherent understanding when someone uses your app, minimizing onboarding.

With that said, companies creating their apps from scratch might prefer the freedom to implement their design sensibilities – and to avoid a uniform looking web.

While there is no right answer, hopefully, these points have helped you to understand the difference between React and Angular better.

Angular provides a stable, structured, and ready-to-go framework that involves a steep learning curve, but offers rapid development and fewer errors once you’re up and running.

On the other hand, React gives you full control, simply providing a set of library elements you can choose to use or ignore.